At 55 years old, Michelle Pfeiffer is still one of the hottest actresses Hollywood has ever seen. This cute blond blue-eyed gorgeous woman has managed to keep her incredible looks, although she has been in the acting business for over 30 years. We have seen her in many movies and she can brag with both Oscar and Golden Globe nominations and various awards received at prestigious film festivals.
Although her talent is unmistakable, today we are going to focus on the hot side of Michelle Pfeiffer and look at some of the movies where she looks particularly gorgeous. 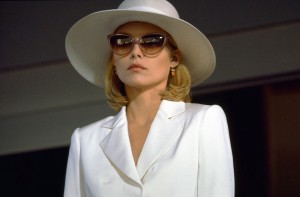 An unbeatable team formed by the highly successful writer Neil Gaiman and director Matthew Vaughn brings the world from Stardust, an enchanting story about a falling star that lands in a magic place, which turns out not to be an ordinary meteorite, but a beautiful and courageous young woman. Her secret powers are the target of a group of witches and other evil characters who just want one thing: the girl’s heart. Among the witches is Lamia, interpreted by Michelle Pfeiffer, a character obsessed with beauty. Besides the moments when she is shown to us as an old woman, Pfeiffer is simply evil and gorgeous.

When it comes to gangster movies, Scarface is one of the best. Michelle Pfeiffer is an airy presence, almost gliding from one place to another in her vintage style dresses, especially those silk evening gowns that make her irresistible. She truly fits the role of Tony Montana’s wife, as she confirms the fact the behind every powerful man, there is a powerful woman.

Madame de Tourvel is one of the innocent victims of Valmont, a ruthless character who spends his life taking everything he wants, without any regard for consequences and people’s feelings. But like any other bad guy, Valmont meets his match and discovers that Madame de Tourvel is an exquisite woman who could make even the worst of men, a better one. With little makeup and those tight aristocrat dresses, watching Michelle Pfeiffer being seduced by Valmont is a delight.

In 1993, Scorsese had in mind very different “gangs of New York”. They were part of the high bourgeoisie of the late nineteenth century, but had a sort of tribal mentality and the same ferocity with which they defended their territory and eliminated intruders.
In 1870, an unwritten social code dominated tyrannical New York high society. It was a time when it was unthinkable to talk, to eat, to run your business, have fun, fall in love or marry by breaking the rules of this code.
The Age of Innocence ends with a choice that will leave a melancholic imprint on the entire lives of the protagonists, ends with an acceptance that resembles resignation and sacrifice, but reveals its true value over time, when passions are no longer there, although their memory causes the same chills as they did in the past. It’s easy to understand why Ellen Olenska, the character of Michelle Pfeiffer is so passionate and gorgeous. Her character is torn by passion, duty and sacrifice and it seem that Michelle Pfeiffer fits incredible well in movies about high class society.